Founder of the NKT-IKBU 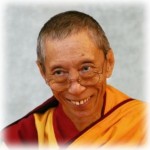 Venerable Geshe Kelsang Gyatso’s life is an inspiring story, and his accomplishments to benefit this world are remarkable.

Born in a remote village high on the Tibetan plateau, he ordained as a Buddhist monk at the age of eight and spent the next 20 years studying the teachings of Buddha in the great Tibetan monasteries.

After concluding his studies and being awarded the title ‘Geshe’, which means ‘virtuous spiritual friend’, he engaged in deep retreat – at first near the Nepali border, and later in the mountains of northern India, where he become renown as a great meditator.

In 1977, after almost 20 years in retreat, at the request of his Spiritual Guide, Kyabje Trijang Dorjechang, Geshe Kelsang accepted an invitation from Manjushri Buddhist Centre to travel to England and become the Resident Teacher at Conishead Priory.

Since then, Manjushri Centre (now Manjushri Kadampa Buddhist Centre, or Manjushri KMC) has been Geshe Kelsang’s spiritual home, where he has given thousands of teachings to his international students. Many of these have been published by Tharpa Publications in 23 highly acclaimed books on Buddhism and meditation.

Geshe Kelsang knows the problems faced by modern people very well, and explains with uncommon clarity how these can be solved through the timeless scientific methods taught by Buddha. Geshe-la’s oft-repeated phrase, ‘simple, but very profound’ perfectly encapsulates his special presentation of modern Buddhism.

So that Kadam Dharma can flourish in the hearts of his students and throughout the world, founded the International Kadama Buddhist Union in 1991. The main activities of the IKBU are provided through three unique study programs – General Program, Foundation Program, and Teacher Training Program – that reveal the entire Buddhist path of compassion and wisdom, leading to enlightenment

Over 30 years Geshe Kelsang has transmitted a complete lineage not only of pure teachings and insights, but also of prayers, ritual practices, sacred art and music appropriate to the needs of modern people and delivered in the local language. He has also established a vibrant ordained community and trained hundreds of qualified lay and ordained Kadampa teachers.

Geshe Kelsang has founded more than 1100 meditation centres and groups in over 40 countries. He has created the International Temples Project with the intention to establish Temples throughout the world.

Although Geshe Kelsang has now retired as Spiritual Director, even at the age of 84 he works tirelessly to help spread the precious teachings of Kadampa Buddhism.